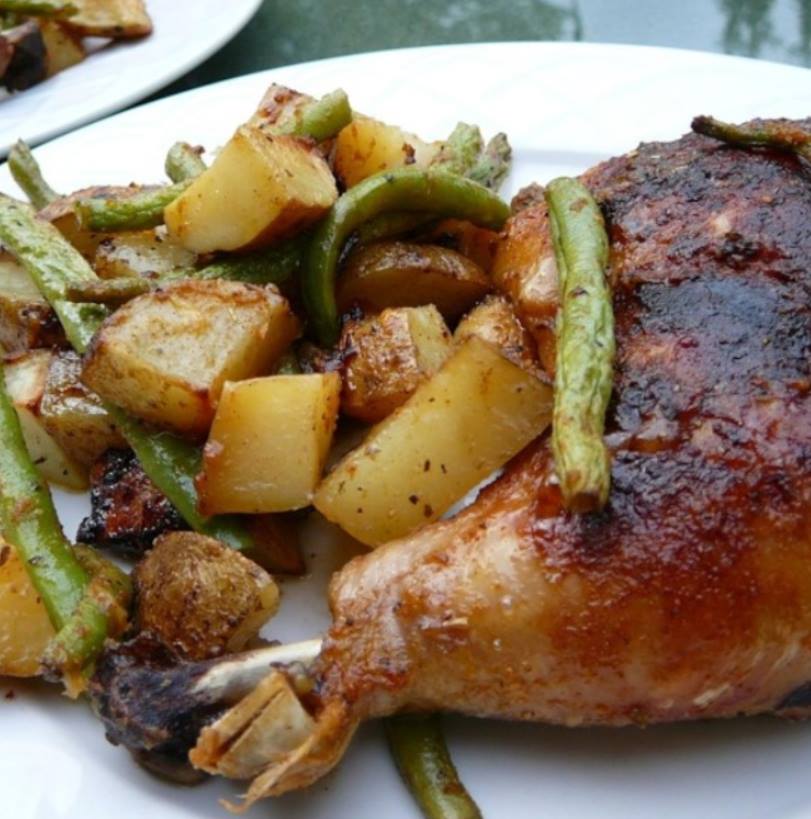 I love one-pan meals, especially when no measuring and exact ingredients are involved. I made this one Sunday when I didn’t want to babysit my food in the kitchen! Turned out great, and I served it with tzatziki sauce.

This smelled so good while baking! You know it’s good when your picky 13 yr old boy tells you it’s the best chicken he’s ever had!! I used 6 bone-in/skin-on thighs. I rendered the fat off the skin in a skillet before baking, as I didn’t want all the fat in the pan.(add the thighs skin side down in a cold skillet, turned to medium heat and cooked for 5 minutes until the skin was brown and the pan is filled with fat) I only used one Tablespoon of Greek seasoning for all the other herbs called for as I thought 6 Tablespoons would be way too much! 1 tsp. of pepper, a tsp. of garlic powder and the zest of a lemon. This cooked up in 40 minutes total. My store had no fresh green beans so I left them out this time, and served it with Greek salad, pita bread and tzatziki sauce! Yum! 🙂

Made this many times, being Greek! To kick it up a notch add a lot of chopped Garlic all over it. When done remove chicken and kick up to 450 and let the potatoes get nice and crispy, be sure to watch and not let burn!

Absolutely Delicious! Will definitely be making this more often! I used 4 boneless skinless chicken breasts, and doubled the potato/spice mixture. Although I don’t know if I needed to quite double all of the seasonings, it was perfectly fine doubled & my family really enjoyed it! My mom wasn’t planning on eating dinner until she smelled it cooking: and then she went for seconds! She liked it so much that she asked if she could review this recipe, too! (That’s saying a lot for my mom-she doesn’t bother with recipes, reviewing, baking, or trying many new food items!) Thanks for a great recipe!

I really wanted to try this recipe and I had the majority of the ingredients on hand minus the beans so I used carrots (my kids love carrots) and some greek seasoning from missingingredient.ca. Due to the heat outside I decided to wrap everything up into a large foil pouch on the BBQ. When I opened the pouch it smelled DIVINE and tasted even better! I served it with a salad and balsamic dressing… definitely making this one again!!

I made this for the first time and followed recipe pretty much exactly the way it’s written only I doubled it because there are 6 of us. I did use bone in/skin on chicken thighs instead of legs. I halved the baby potatoes so they would cook faster and brown nicely. Before I added the beans I broiled the chicken and potatoes for about 4 mins to get a nice brown. Everything came out so very tasty. I will make this again for sure!

Preheat oven to 400°F and lightly grease a small baking dish. Set aside.
Make 5-6 slits in each chicken breast, taking care not to cut through completely. Stop the cut about 1/2″ from the bottom. Place chicken breasts in prepared baking dish.
In a small bowl, mix together the olive oil, lemon juice, garlic, and oregano. Brush over chicken breasts, making sure the mixture gets down into the slits. Season generously with salt and pepper …

To Find Out All The Yummy Ingredients And The Step By Step Directions To Follow for this Delicious recipes,Please Head On Over To Next Page Or Open button
JUST 5 INGREDIENTS CRISPY BUTTER COOKIES
SMOKY FOUR CHEESE MACARONI BAKE