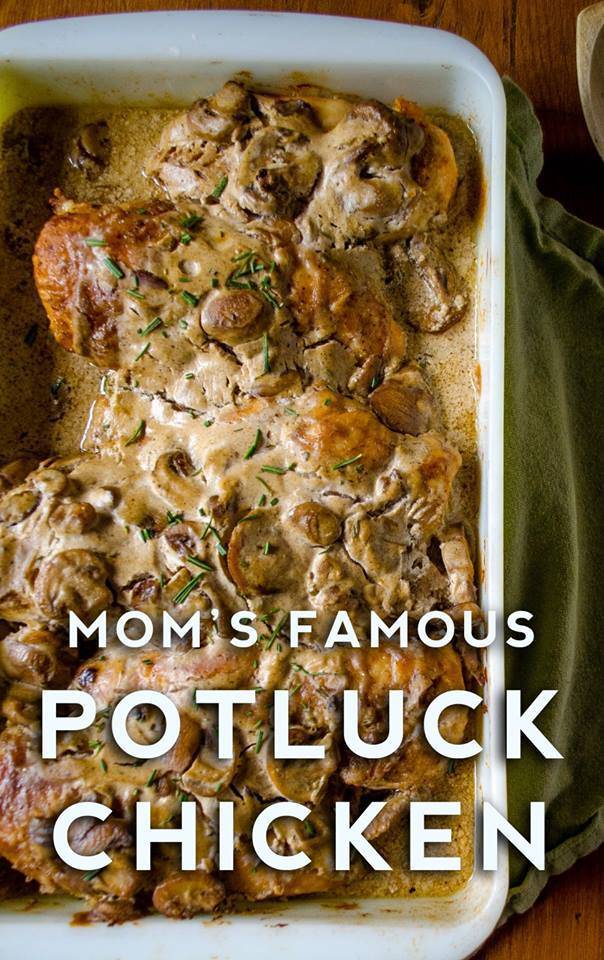 When you bring a dish to a potluck, you want it to be good. Not just good… you want it to be the kind of good that people go on and on about, the kind of good that brings in half a dozen requests for the recipe, the kind of good that leaves the serving dish licked clean. I imagine that Miriam (whoever she may be) called this recipe Potluck Chicken because it’s just that kind of dish. It’s comforting and hearty with a sauce that’s creamy and rich in earthy, herby flavor. And it’s easy. And it feeds a crowd. Perfect for a potluck.
I found the recipe in a box of old handwritten recipe cards. There are some gems in there, but there are a lot – A LOT – of baked chicken casserole dishes. You know, the ones that involve a can of condensed whatever soup? But this baked chicken dish used real ingredients and looked rather delicious so I put it at the top of the stack to try. I’ve been cooking my way through some of the recipes, I call it the Recipe Tin Project. You can read more about the contents of the tin and the project on the first post here.

Compared to some of the other cards in the box, this one is illustrated rather simply. (There’s one card that’s bright orange and looks like a giant chicken with lines across its body where the recipe is written.) Most of the other cards list out ingredients and steps in bulleted form, but this one has flowing handwriting that incorporates the ingredients into the instructions, almost like a little recipe story. In the printable recipe below though, I’ve included an ingredients list and step-by-step instructions for ease of use.

To Find Out All The Yummy Ingredients And The Step By Step Directions To Follow for this Delicious recipes,Please Head On Over To Next Page Or Open button
BEST TRIPLE CHEESE & BACON PINWHEELS
EASY SLOW COOKER CHICKEN PARMESAN PASTA