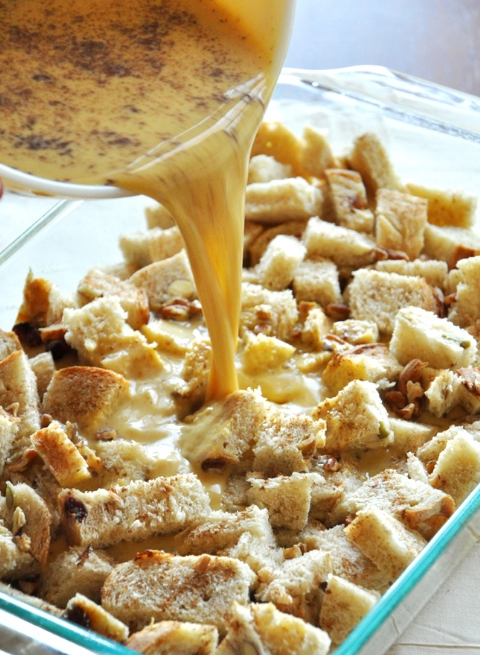 This was a really great addition to a brunch menu. It was perfectly spiced and not too sweet, but just sweet enough to not need syrup. The crumb topping is an extra special touch. I found I liked it best with just a dollop of fresh whipped cream to complement the spicy pumpkin flavor. I didn’t have Texas toast and substituted a loaf of regular sandwich bread, which when cubed equaled about 8 cups. I also took the crusts off first. The only minor issue was with mixing everything in the baking dish – that caused it to stick to the dish. I would recommend stirring the pumpkin mixture in a large bowl and adding the bread cubes to the bowl to mix, then pouring it all in the baking pan

This was fantastic! Thanks for the great recipe. I made a couple of changes to try lightening it up and reducing the number of ingredients used: egg beaters instead of eggs, lower calorie/high-fiber white bread instead of the Texas toast, 2 heaping tsp of pumpkin spice instead of the cinnamon/cloves/nutmeg combo, and reduced the amount of brown sugar in the topping to 1/4 cup. I also added a little 2% milk to the pumpkin mixture so there was enough liquid to fully soak the bread. Ended up with 12 generously-sized squares of french toast, at about 160 calories (and 10 grams of protein and 8 grams of fiber!) a piece! Turned out great, although I don’t doubt the original recipe is even better and richer tasting – will save that for a special occasion 🙂 The best part — I wrapped the leftover squares individually in plastic wrap and froze them, and am looking forward to reheating them in the toaster oven for an easy/healthy breakfast later this week!

This was amazing! I didn’t make any changes to the recipe except adding an extra teaspon of sugar. For the topping, I used 3 tablespoons of butter and added approximately 1 cup of finely chopped pecans. It is delish served alone or amazing with a smidgen of maple syrup and a dollop of Extra Creamy Cool Whip. I placed the cubed bread into a 13×9 Pyrex dish and poured the puree on top and gently tossed with my hands; then sprinkled with the topping. My family is very picky and they loved, loved, loved this dish!

I really enjoyed the Frech toast bake, however, an entire loaf of Texas thick-sliced bread is not needed! In step 3 of the directions it states, ” Arrange the bread cubes in a single layer”, so only a few slices of bread needed to be cubed. I had cubed up the entire loaf since that is what is listed in the ingredient listing. Also, I would suggest lining the cake pan with foil and geasing the foil, so clean-up of the pan is easier. As another review suggested, mix the ingredients in a bowl and then pour the mixture over the bread cubes.

Preheat oven to 350 degrees F (175 degrees C). Grease a 9×13-inch baking dish.
Whisk the eggs, vanilla extract, 2 teaspoons of cinnamon, the cloves, nutmeg, and white sugar together in a bowl; beat in the pumpkin until fully incorporated.
Arrange the bread cubes in a single layer in the prepared baking dish; pour the pumpkin mixture over the bread cubes, and gently toss to coat …

To Find Out All The Yummy Ingredients And The Step By Step Directions To Follow for this Delicious recipes,Please Head On Over To Next Page Or Open button
PEANUT BUTTER TURTLE THUMBPRINT COOKIES
BEST HOMEMADE BIG MAC SAUCE