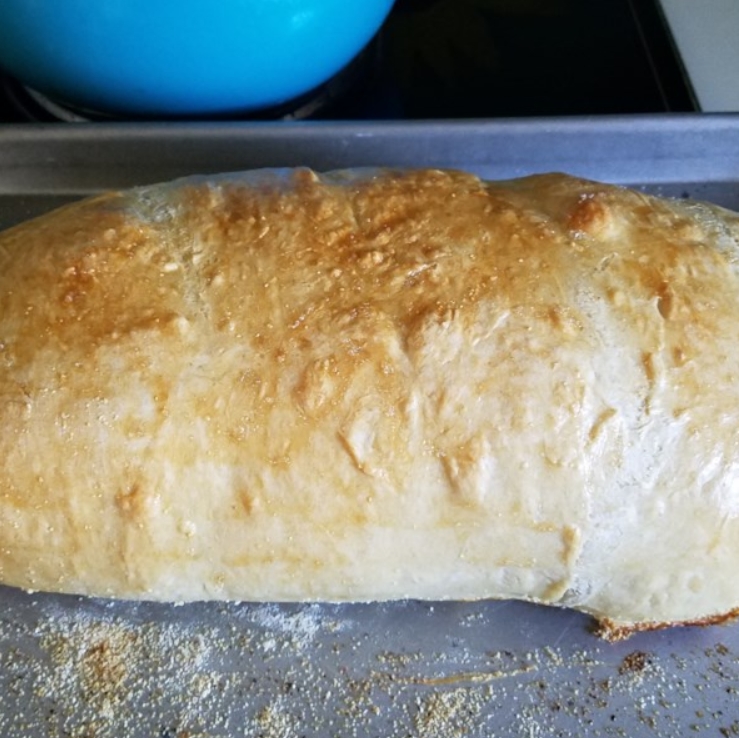 All I can say is “Wow”. I tried this recipe twice. The first time I made this, I found the bread to be a bit too dense, but the second time, I added a pinch more yeast and only used 5 cups of flour. I made a nice long baguette and brushed the loaves with just a beaten egg white (left out the water) and I got a nice crust and a lighter loaf. Has come out perfect every time.

This is a very good & easy french bread recipe. I first made the bread exactly as described and ended up with dough that was a bit too dense. The bread was good but a bit thick and a little on the bland side. Being an experimenter and something of a perfectionist, I decided to give it another try and proofed the yeast in the warm water with a little bit of sugar before making the dough. I also decreased the flour (noting that the 6c in the ingredient list was more of a guideline and that the real goal was nice, elastic dough) to ~5 1/4 c. I also increased the salt amount to 1.5tsp as other reviewers had mentioned. This batch was considerably lighter and more tasty than the original recipe. While bread making is up to taste, I’ll be doing it the second way from now on! Great recipe and thanks very much for sharing it!

I’ll put it to you this way, this recipe made 2 loaves, I planned on serving it with dinner. When I took it out of the oven I “decided” that I had to be the guinea pig, or pig if you will, because I ate half of 1 loaf. Then the kids came home from school & they polished off the first loaf, and the second was a quarter gone. Hubby came home from work & snagged a chunk (suprising because he’s not the biggest bread fan), & before I knew it, the four of us (baby had regular bread..egg alergy) were sharing 1/4 of the second loaf with dinner; all staring at it, nobody wanting to “grab” because deep down we all knew that we had eaten our share. This was AWESOME, I sprinkled sesame seeds on the top after adding the egg white. LOVE IT, THANKS MUCH Jenn!!!

In a small bowl, dissolve your yeast in ½ cup warm water. Make sure that your water is warm (not too cold, not too hot). Let proof for 10 minutes.
In a separate mixing bowl, combine hot water, sugar, salt, oil and 3 cups of the flour and mix together. Add the yeast mixture to a bowl.
Add the remaining 3 1/2 cups of flour, one cup at a time, mixing after each addition. Watch for it to start pulling away from the bowl to know it’s ready. Once all of the flour is added, let sit for 10 minutes.
Separate your dough into 3 pieces. On a floured surface roll each piece into a 9×12 rectangle. Roll it up like a jelly roll. Shape into a french bread loaf and smooth out edges …

To Find Out All The Yummy Ingredients And The Step By Step Directions To Follow for this Delicious recipes,Please Head On Over To Next Page Or Open button
FRIED CHICKEN WITH CREAMY GRAVY
EASY AND DELICIOUS NO-BAKE CHERRY DELIGHT